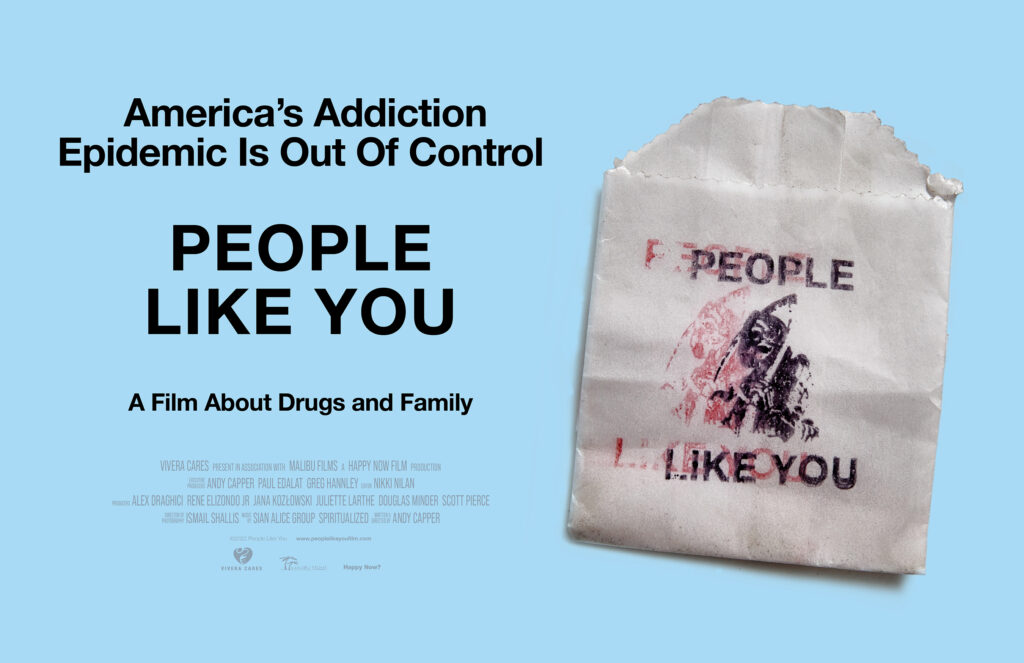 NEWPORT BEACH, Calif–Vivera Cares and Happy Now Films announce the streaming release of People Like You, a feature-length documentary told through the eyes of those suffering from substance use disorders.

Directed by Emmy® award-winning writer and filmmaker Andy Capper and executive produced by Paul Edalat and Malibu Films, People Like You is the filmmakers’ way of shining a light on the personal stories of addiction so often ignored by media. While news networks have sensationalized the war over the pharmaceutical and medical industry’s part in the opioid crisis, the story of the patients themselves is very often lost in the noise.

Every 10 seconds, a patient is brought to the ER due to a drug overdose. In 2022, 39 million people in the United States suffer from some form of substance abuse disorder. From the suburbs to the mansions of Malibu, substance abuse disorder is not limited in its effects. People Like You tells the very real story of people with an addiction, their loved ones, and the people trying to help them in the troubled rehab industry.

Former Congressmember Patrick Kennedy, himself a person in recovery, is featured in the film, urges Congress to radically rethink how substance abuse disorders and addiction are treated in the United States, calling it a public health crisis with a fraction of the funding towards finding a solution.

With addiction rates on the rise post-pandemic, it is the mission of the film to bring the very real, personal stories of individuals to light. “We made this documentary to tell the personal, and sometimes graphic, stories of real people struggling with substance abuse. Addiction is not a choice; we need to be clear about the cause so we can be clear about the solution,” said Paul Edalat, executive producer of the film. “When you focus on the wrongdoings of major corporations, it is hard to see the actual problem on the ground, and people become statistics instead of patients. I hope we can bring a bit more awareness to addiction by having a real and open discussion on what we, as a society, need to change to prevent more senseless deaths.”

For streaming details or to watch the trailer for People Like You, visit peoplelikeyoufilm.com.

People Like You is a co-production of Vivera Cares and Paul Edalat, Happy Now Films, and Malibu Films.

Vivera Cares is a non-profit organization dedicated to making a positive difference in vulnerable communities both domestically and worldwide by finding innovative ways to support patients, medical providers, organizations, and their local communities.

For more information, please visit viveracares.com or connect with us on Instagram.

PrevPreviousVivera Welcomes Saurabh Radhakrishnan to its Advisory Board

NEWPORT BEACH, Calif–Vivera Cares and Happy Now Films announce the streaming release of People Like You, a feature-length documentary told through the eyes of those

Vivera Welcomes Saurabh Radhakrishnan to its Advisory Board

NEWPORT BEACH, Calif.–Vivera is pleased to welcome Mr. Saurabh Radhakrishnan to the Company’s Advisory Board. Mr. Radhakrishnan will support Vivera in its development and commercialization initiatives